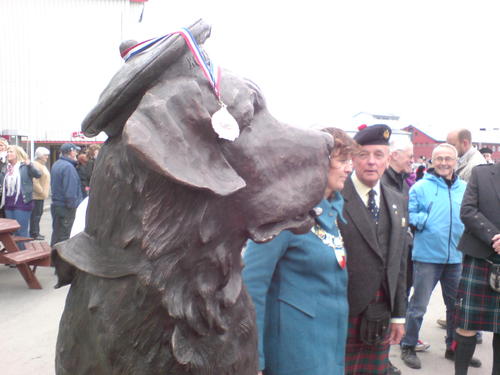 The dog Bamse came to Honningsvåg in 1937. From 1939 Erling Hafto, Bamse’s owner and the captain of the then guard boat “Thorodd”, was stationed in Tromsø. Bamse followed him on board.

When the Germans invaded on the 9th of April 1940, “Thorodd” participated on the allied side in Northern Norway, until the King and a small following was transported to . Bamse became famous in the navy for his bravery and his love and care for the crew. Pictures of Bamse wearing a sailors hat was sent to Norwegians all over the world, especially around holidays such as Christmas and the 17th of May, and many tales were told of his war efforts. Bamse stayed on board the “Thorodd” until his death in 1944.

A statue of Bamse was unveiled in , on the 17th of October 2006.  In book about Bamse was released in English, and has sold especially well in .  Read more...

The statue of Bamse in Honningsvåg is sponsored by the and Porsanger port authority IKS, The Norwegian Coastal Administration and others. The project leader on the Norwegian side has been Sigurd Berg Hansen.

Thursday the 18th of June a model of the naval ship “Thorodd” was unveiled at the . Kristian H. Skancke held a short historical presentation of the ship, with extra weight on the ships activities under the German invasion of in 1940.

The museum is exhibiting the model of the ship and displays a small collection of photographs of Bamse.